This time our topic is “Communication” i.e., I will let you know about “Telecommunication” and the details of the Indian Telecom Spectrum Auction 2021.

I will let you know about what spectrum is? Why is spectrum being sold for larger amounts by telecom operators? How do signals from our mobile move to another person’s mobile? and how do these telecom operators send these signals?

The reason why we chose this topic is that in March 2021,  our Indian government put 4G spectrum for auction. In that auction Telecom operators like JIo, VI, Airtel have participated.

Do not confuse when you hear the word spectrum. It is just like how we recharge our sim for every 3 months, telecom operators also recharge themselves from the government. But they recharge for 20 years.

To let you know about all this information, Before we come to know about spectrum first we have to know how old telephones work. How Does Old Telephones Work?

Let me give you a small example to make you understand how the telephone works. When you speak, your words would get encrypted and goes to the nearest exchange office through the black wire

In that exchange office, you can see boxes. Those boxes would get what you spoke. From that box, that encrypted info would go to another biggest exchange office in the city.

After reaching the nearest office, that encrypted signal would reach to whom you wanted to talk. What I just told you is the Telephonic process.

How Does Mobile Communication Work?

In the mobile communication process also, exchange offices would present but they would have updated technology.

You need to have a SIM on your mobile if you want to talk through your mobile. Aadhar and pan card details would be collected when you buy a sim card.

When we speak through our mobile, the signals will be transferred to an antenna which will be on the nearest tower of our location. When the antenna receives the signal it starts to search for the nearest exchange office.

In the exchange office, this is called a Mobile Switching Centre. This MSC is like a library to telecom operators. Our Aadhar details would be stored in this MSC.

Like you think, signals from antennas would not directly reach MSC since our globe is circular, those signals go outward.

If you observe any cell tower, you could find big fiber below the tower, using those fibers,  signals would be transferred to MSC.

In general, people would think our speaking is only possible because of wireless. But in reality, only communication from mobile to tower is wireless apart from that everything is possible by fibers.

Since MSC would have our information already they would come to know about who is calling. The person whom we are calling would have given Aadhar details. when he/she bought the sim, so their details are also stored in MSC.

Then the antenna on the tower would send those signals to receivers mobile through wireless. If you observe, when you call someone, the “TUK-TUK-TUK” sound you would hear.

When you are hearing this sound, the whole process would occur. But right now that sound is replaced by Covid 19 info.

If you observe the tower, a rectangular thing is called a “GSM” antenna. This GSM receives or sends our calls.

And the circular one is called “MICROWAVE Antenna”. This microwave antenna used to communicate between towers.

To know more about How Do Mobile Phone calls Work? check out our article here.

To make you understand, I will give you one example.

Let’s suppose I called my friend who is in Hyderabad from Banglore(ME). Signals from my mobile would reach GSM Antenna in the nearest tower GSM antenna —> fiber optics —> nearest MSC in Banglore.

But when signals reached the antenna, it came to know that my friend was not in his area. Then this circular antenna “Microwave antenna would search for my friend signal”.

Then those would be sent to the GSM antenna, and finally, they reach my friend’s mobile. If he is not available near any tower, then you will hear, the number you are trying to reach is unreachable.

When you are out of range from your nearest tower then this Microwave antenna helps to transfer the signal. Right now we are using 4g mobiles only. Let us know about all generations of mobiles.

4G has not been developed at once. At the introduction of 4G, no telecom company was able to reach the government’s requirements. So the government asked to continue 4g with Long term evolution.

That is why 4G was introduced with 4GLTE. 4G works in two ways. For data transfer, it uses fiber optics and for calls, it uses Radiofrequency.

Due to this noise and disturbance would occur for voice calls. If you call from old Jio phones, calls would not be connected so easily due to the usage of radiofrequency.

To overcome this problem, Reliance has introduced one technology where the voice would be transferred along with data which transfers through LTE. That is why it is called “Voice over LTE”.

If you observe, when you call through VoLTE mobile call would be connected so easily but for LTE you could hear tuk tuk tuk sound in LTE or old internet mobiles if somebody calls mobile data would be disconnected.

But in VoLTE it is not like that since data and voice would transfer through the same fiber, mobile data would not stop in VoLTE mobiles. 4G introduced is 4G LTE and advancement is 4G VoLTE.

Our mobiles are capable of sending to towers which are 3 or 4 km away. Let’s assume you are a soldier, if you have the tower at the border that is ok. If an enemy comes, the first enemy would destroy the tower.

In that situation, you cannot contact anyone to overcome these problems. The military would use satellite phones just like how our mobiles got signals from towers these satellite phones would get from satellites since it does not have MSC during transmission it would be difficult to trace your number.

Our mobiles are full-duplex but satellite phones are half-duplex earlier,  when someone talks someone has to be silent. If you observe in English movies, they would speak like alpha, charle by pressing that button and says over before leaving the button.  These satellite phones were eligible for security forces only not for civilians.

After all this time, are you thinking like why am I saying nothing about spectrum? You should know the basics which I told you as of now before knowing spectrum.

Must Read: Our complete article on Mobile Communication Technologies

What is a Spectrum in Telecom?

We all know energy travels in the form of waves known as electromagnetic waves or EM waves. 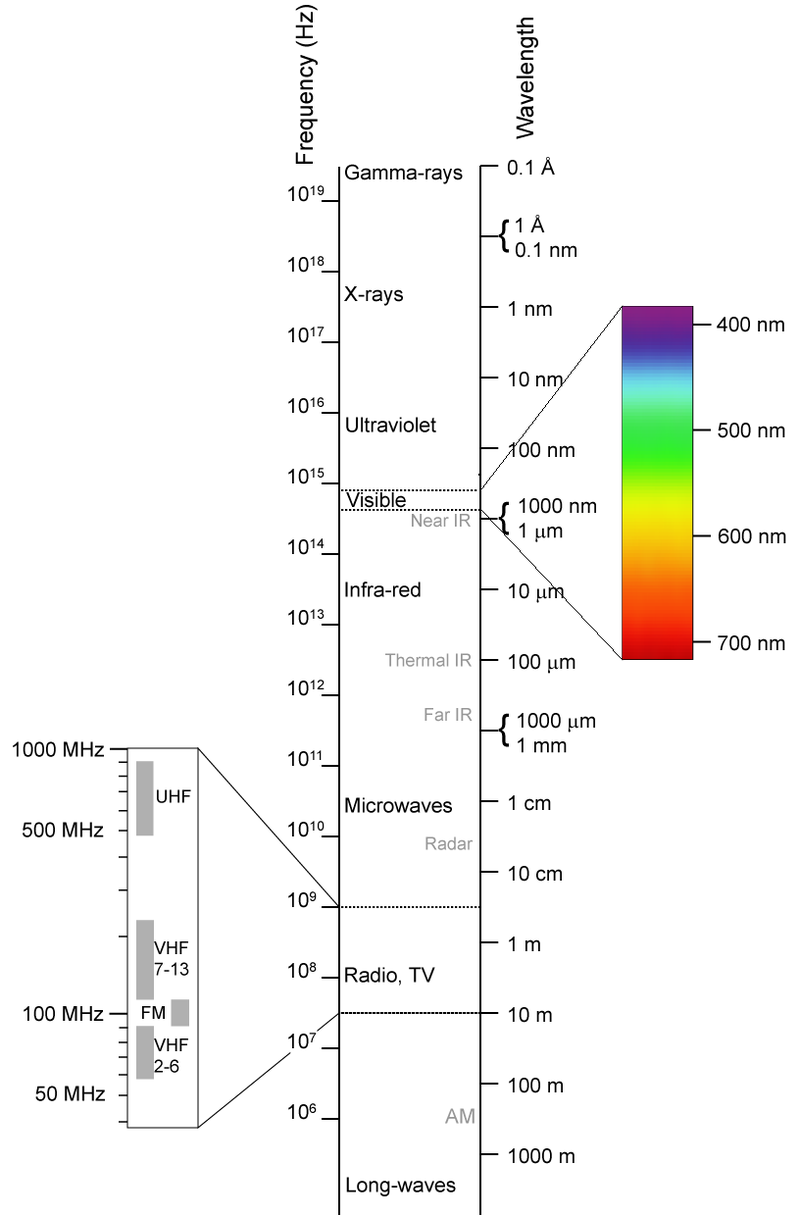 These waves differ from each other in terms of frequencies. This whole range of frequencies is called the spectrum or Electromagnetic spectrum. In telecommunication like TV, radio, and GPRS, radio waves of different wavelengths are used.

They are divided into bands based on frequencies. Mobile phones use two technologies based on different parts of the radio spectrum. They are GSM and CDMA.

For example, if we consider the whole electromagnetic spectrum as earth, then each frequency band is like the roads or routes on the earth.

We had a complete article on this Spectrum, You can read it here.