Also, similar to the Nintendo Switch Joy-Con, and the Xbox One and Xbox Series X Video game Controller.

Video game controllers are precision devices that give us access to competitive battlefields, uncharted worlds, and epic storylines, and this here is one of their most critical components.

But where is this circular metal object located, and what does it do? In this episode, we’re going to open a PlayStation 4 DualShock video game controller to see how it works.

First, we’ll go through the components and then we’ll see how the buttons and analog sticks work, and in the process, we’ll learn where this delicate metal disc is located, and why it’s critical in almost all of the console video games you play.

After removing a few screws, we can take off the plastic outer housing and see all the components inside. 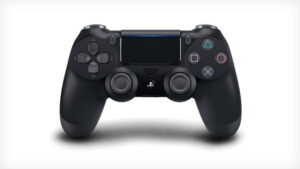 At the center of the controller is a  touchpad, along with a small speaker. Next is the mid-frame and below that, the primary printed circuit board or PCB.

On the top side of the circuit board are a number of components such as the microcontroller unit which are the brains of the controller, a pair of analog joysticks, the wireless communication microchip, an antenna, a headphone jack, an additional E.X.T. port for seldom-used applications, and a set of pushbuttons.

On the bottom of the PCB are a set of connectors for flat cables to be plugged into, an audio codec microchip, and an accelerometer and gyroscope microchip.

Below the PCB is the battery case and the rechargeable lithium-ion battery. Next, attached to both sides of the mid-frame are motors with off-balance weights that, when spun up, cause the controller to vibrate.

Finally, attached to the back plastic housing, we have an additional printed circuit board, or daughter-board that holds the micro USB port, and a multicolor LED with a set of plastic pieces that guide and disperse the light in order to illuminate the controller’s triangular light.

That’s pretty much it for the components. Have you figured out where this metal disk is located? If you haven’t, here’s a hint: there are 4 of them in every controller.

Let’s move on and see how the buttons work. For each button on this PlayStation 4 controller, there are 3 parts.

The plastic front face, the rubber button gasket with a conductive bottom, and the flexible plastic contact board.

On the contact board is a set of intricate wires or traces protected by insulating plastic, similar to the wires that run through the printed circuit board.

Below each button is a gap in the wire that breaks the path of electricity. When a button is pressed, the conductive pad on the bottom of the rubber button gasket presses against the contact board, and the gap is bridged, thereby closing the circuit, and allowing electricity to run through the traces.

When you let your finger off the button, the shape and design of the rubber gasket pull the conductive bridge away from the gap, and the circuit is broken.

Other pushbuttons use similar setups, but with different materials and constructions. This concept applies to all the buttons except the L2 and R2 triggers.

Details on how these works are included in the Creator’s Comments. Let’s move on and explore the analog sticks.

These analog sticks are solder-mounted to the printed circuit board, and each one has almost a dozen different parts inside.

On top, we have the rubber thumb pad and the plastic joystick shaft below it. Next, we have a metal housing that limits the movement of the joystick.

Inside the metal, housing is a pair of plastic brackets that are perpendicular to one another called followers.

The function of these following brackets is to change the up down left and right movements of the analog stick into a small rotation over here.

Each of these brackets is attached to a potentiometer whose function in this application is to measure rotation.

If you push the analog stick to the bottom right, these two brackets will rotate, which in turn will rotate the center of these two potentiometers.

Let’s open one of the potentiometers to see how it works Voila! Inside we find that small metal piece we’ve been talking about and it’s called a wiper.

On this side, we have a plastic housing which contains electrically resistive material printed in a set of two circles on the inside called a track.

So, when we rotate the wiper, the position where the wiper contacts the track changes, and thus changes the effective length of the resistive material that electricity flows through.

Let’s follow the path of electricity. We can see that this metal disk, or wiper, is rotated by the following bracket.

The wiper contacts the track in different locations than before, thus changing the distance along which the electricity passes through the resistive track, thereby changing the overall resistance.

The wiper is specially designed so that the metal is bent to continuously press against the track at an exact set of locations.

This allows for precise measurement of movements of the joystick, which is critical for any eSports or similar video game.

Furthermore, we can see that for clockwise and counterclockwise rotation of the potentiometer we use a set of three terminals.

One connects to the wiper, and the other two connect to each side of the track for measuring left and right or up and down motions.

By the way, this type of construction is similar to other video game controllers, however of course there is considerable variation in layout and design.

If you want to give any suggestions to the Tech Geek then comment down below.

Know about sensors used in our smartphones here